Now this is a an instrument that pretty much nobody has heard of.

Almost as big as a concert ukulele the guitar ukulele is the smallest 6 stringed instrument around today. It’s actually smaller than a travel guitar too. Now that’s saying something. If you’ve tried a lap steel guitar, then you’ll appreciate the sound of a guitalele even more.

Anyways, can you guess how they came up with the name “Guitalele”?

What is a Guitalele or a 6 string ukulele?

Just like you may have guessed, a guitalele is basically half a guitar and have ukulele. It is also referred to as a 6 string ukulele.

A guitalele comes with six strings like a real standard guitar.

However, sound wise, it’s basically like putting a capo on the fifth fret.

A guitar capo is something used to ‘preserve’ a certain octave on a guitar for an entire song.

James Blunt used it for his famous song ‘You’re Beautiful’.

If you watch him play, you’ll see he only uses the frets that fall under the capo. As it produces a certain sound.

Pretty common thing to do on stringed instruments by the way.

As far as the size goes, a guitalele it’s literally ¼ of your average guitar size.

So to say that it’s quite small is an understatement. I guess you can say that it is small enough for ukulele players but big enough (Sound wise) for full size guitar lovers.

If you were always looking for that perfect mix a ukulele that you can play like a guitar, this is what a guitalele is supposed to bring to the table.

Why should you buy a guitalele? Why can’t you just tune a ukulele to a standard guitar setting right?

Well because the main different between a ukulele and a guitar is a uke only has 4 strings and guitar has 6.

That’s why, a guitalele serves a nice little ‘mixed baby’ of a guitar and a ukulele.

A guitalele is also known as kiku (Hawaiian name).

So for who is this instrument designed for?

First, for guitar players who simply want to practice their guitar skills (While watching TV or sitting in a small room, etc).

The second group that would enjoy the guitalele would be for guitar players  and enthusiasts who prefer a small sized stringed instrument.

A guitalele can be great beginner guitar for kids as well.

At the end of the day, a guitalele is for anyone who wants to play a fun stringed instrument and have a great time doing it. 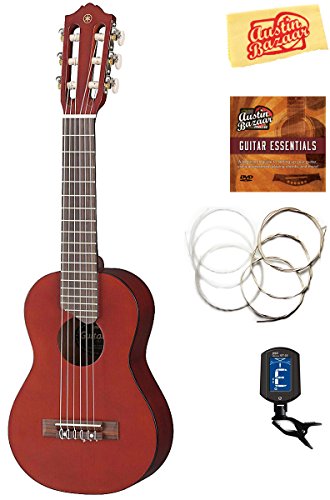 All right guys, this 17 inch wonder is the first guitalele on the list and it’s quite possibly the best guitalele so far. Made by the one and only, king of stringed instruments, Yamaha. The Yamaha GL1 guitalele comes with quality nylon strings, and it’s already in tuned. this is actually the first time that it’s been available in North America.

By the way don’t get confused, the strings might look they are made of steel but they’re actually nylon. That’s one of the main things about a guitalele. They always come with nylon strings (I mention this a couple times later as well).

Overall, the Yamaha GL1 is a quality product with impeccable construction. Basically the best guitalele out right now and if not, definitely in the top 5. This one is an entire bundle complete with a guitalele bag as well. 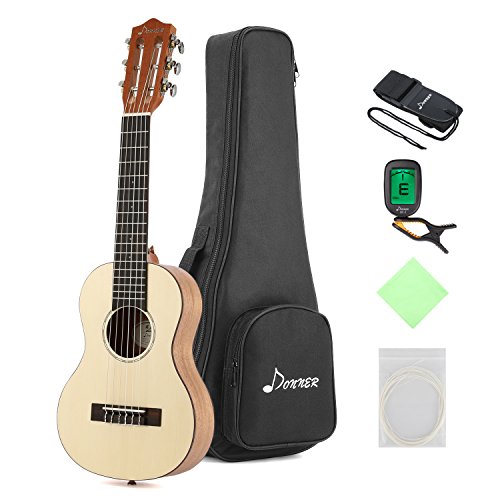 This guitalele is 28 in length. Still small enough to qualify as a guitalele but definitely larger than the Yamaha mentioned earlier.

Donner is another brand that I really like because they make decent stringed instruments and no matter what musical instrument you get from them, it tends to fit most people’s budget.

This one is another great package as it includes all the necessities such as a tuner, a bag and a few other things.

Donner can definitely improve more on the construction of this specific guitalele model but most people seem to be happy with what they’ve received.

Although Luckycyc seem to be someone that is just trying to get a piece of the guitalele pie, that doesn’t mean they’re not putting out quality products.

Unfortunately, we don’t have any data on this new brand but decided to give them a chance. After all, everyone deserves a shot.

Hope these guys do good as it will only mean more choices for you and I. If you know more about this brand, please contact us.

If you enjoy playing a ukulele or use to play a guitar, you will really love this guitalele. Small in size, big on sound and overall,  just a quality product.

Just like a good guitalele is suppose to be. The Gretsch G9126 has quickly become one of the most loved guitaleles out there today (Praised especially by professional guitar and ukulele players).

It comes with case and a good looking mahogany body. All in all, most seem to really enjoy this guitalele but for a lot, it doesn’t come tuned.

So once you get it, make sure you test the tuning on it first. 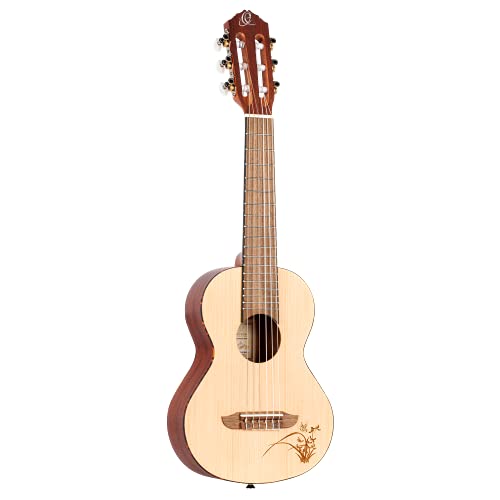 A very well made guitar (Unlike the RGL5 E), the RGL5 has been well received and is deemed as a quality guitalele. This counts for overall construction and it’s sound.

We would like to hear more from other users on their experience has been so far with this specific model.

Anatomy of a Guitalele

A guitalele is pretty much like a guitar just super small in stature. A good way to compare it would be with a concert ukulele.

As mentioned earlier, right around 17 to to 28 inches.

Unlike your electric or acoustic guitar, the strings on a guitelele are nylon.

So it’s easy to play with and it’s tuned to. As far as the anatomy goes, the only main difference vs a ukuelele is a guitalele has 6 strings and ukulele has 4.

To tune a guitale, you simply need to tune the strings to the following setting:

That’s how you tune a guitalele.

Unlike an acoustic or electric guitar, they strings on a Guitalele are always nylon. It’s one of it’s key and core features. There were some electric guitaleles floating around but that just didn’t work.

Soon they were taken off the shelves. So remember, a guitalele always has nylon strings. The idea behind a guitalele is to play your favorite standard guitar tunes but also be easy on your fingers.

All at the same time.

Since it’s still somewhat hasn’t caught on yet, there are not that many brands who are involved with making guitaleles just yet.

Here are the ones that we think are doing a great job so far.

Thank god Yamaha entered this market. The Yamaha guitalele is hands down as good as the famous Yamaha acoustic guitar F series. Can’t wait to see what other gutalele models they introduce in this genre.

Another important brand in the music industry (Especially for guitar players), this American brand made it’s name with guitar pedals so it’s only right to see them enter the guitalele market as well.

You might not have heard of them but they’ve been in the game since 1994. Ortega specializes in making professional guitars and they didn’t disappoint with their guitalele. They better not as they are from Spain. The birthplace of classical aka Spanish guitars. Basically what a guitalele really is.

How to tune a guitalele with a tuner?

You tune a guitalele just like you tune a standard guitar. That’s because a guitalele is simply a “mini” version of a guitar (Anatomy as well).

How to tune a Yamaha guitalele?

This depends on what kind of model you have but for a good chunk of them, it’s pretty much like tuning any guitar.

Can you put guitar strings on a guitalele?

Absolutely.
As long as the strings are nylon strings. That’s the main thing about a guitalele.
The strings are pretty much always nylon. A guitalele provides a gentler “guitar” experience.
A guitalele It’s basically a friendlier and “cuter” version of a guitar.

Can you put steel strings on a guitalele?

You definitely can but it’s not recommended. It kind of defeats the purpose. The whole idea of having a guitalele is having a small mini classical guitar in your hands. Not an acoustic one.

In fact, that’s exactly how you’re suppose to tune a guitalele.

How many frets on a guitalele?

The longer the fretboard, the more frets it’s going to have.

However, if you run into a so called guitalele that is more than 28inches, I don’t think that qualifies as a guitalele.
It’s just too big in length.

How to choose strings for a guitalele?

Nylon strings seems to be the main type of strings used on a Guitalele. As long as you are able to find some quality nylon strings, you should be good to go.

How to install a strap on a guitalele?

Just like any stringed instrument, most guitars come with two guitar strap buttons. One is near the headstock (Top) and one at the bottom of the body of the guitalele.

If your guitar has these two buttons then you simply attach a guitar strap to these.

By connecting one end to each button.

If you don’t have them, you can look into getting a guitalele leash.

How to say guitalele?

Guitalele is pronounced Gita-Le-Le.
Similar to Ukelele. At least for the last part.
The first part is pronounced like a “Gita”
Together it’s “Gita-ta-le-le”.

Should I get a guitalele or an ukulele?

This is a great question.
It depends on what kind of music you like playing since both have a different tuning.
A ukulele is tuned to: ADGCEA
A guitalele is tuned to a standard guitar at: EADGBE
Also keep in mind, a ukulele has 4 strings and guitalele has 6.
So if you want to play some nice Hawaiian classics, go for a ukulele.
If you want to play what you hear on the local radio, youtube and most mainstream stuff, then go for the guitalele.

What size case is good for a Yamaha guitalele?

Depends on the size of the guitar. If you get a 28 inch guitalele, you obviously can’t fit it in a 17 inch guitar case right?
So make sure you get the appropriate guitalele case. As long as your guitalele fits in nice and snug, then you’re set. 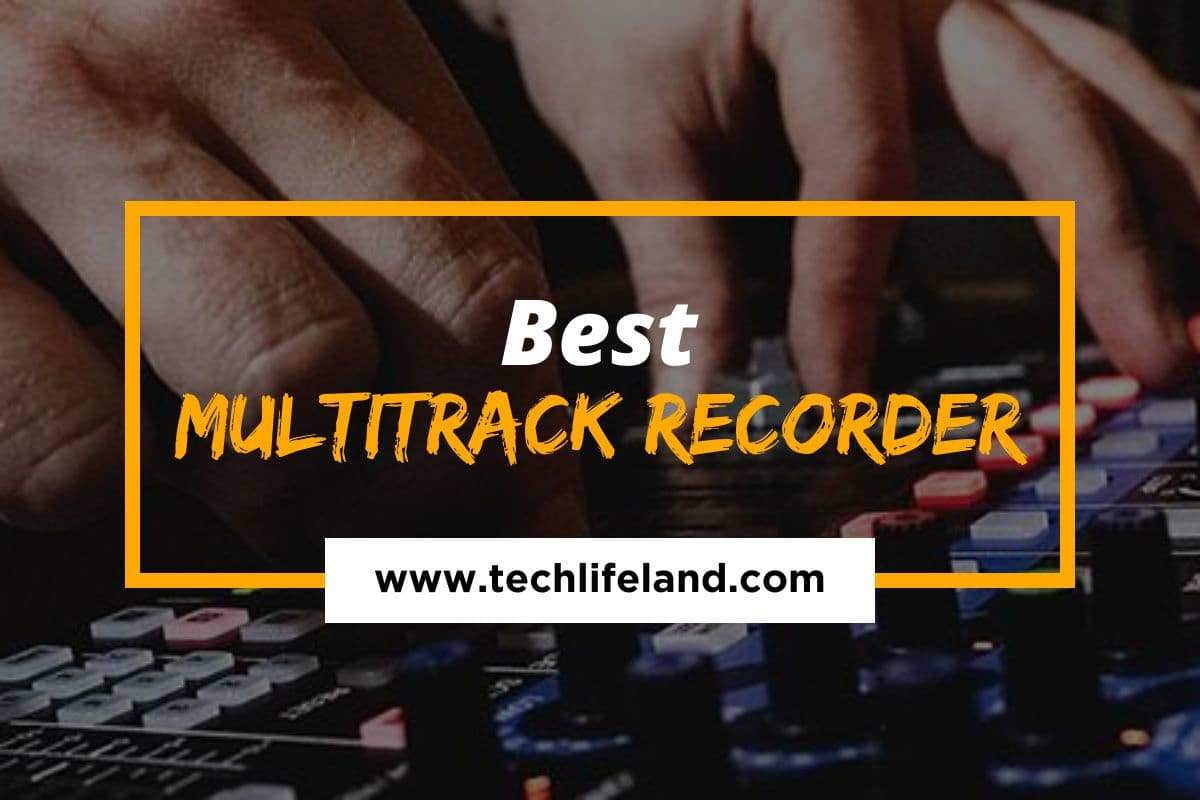 Best Multitrack Recorder For Beginners in 2021 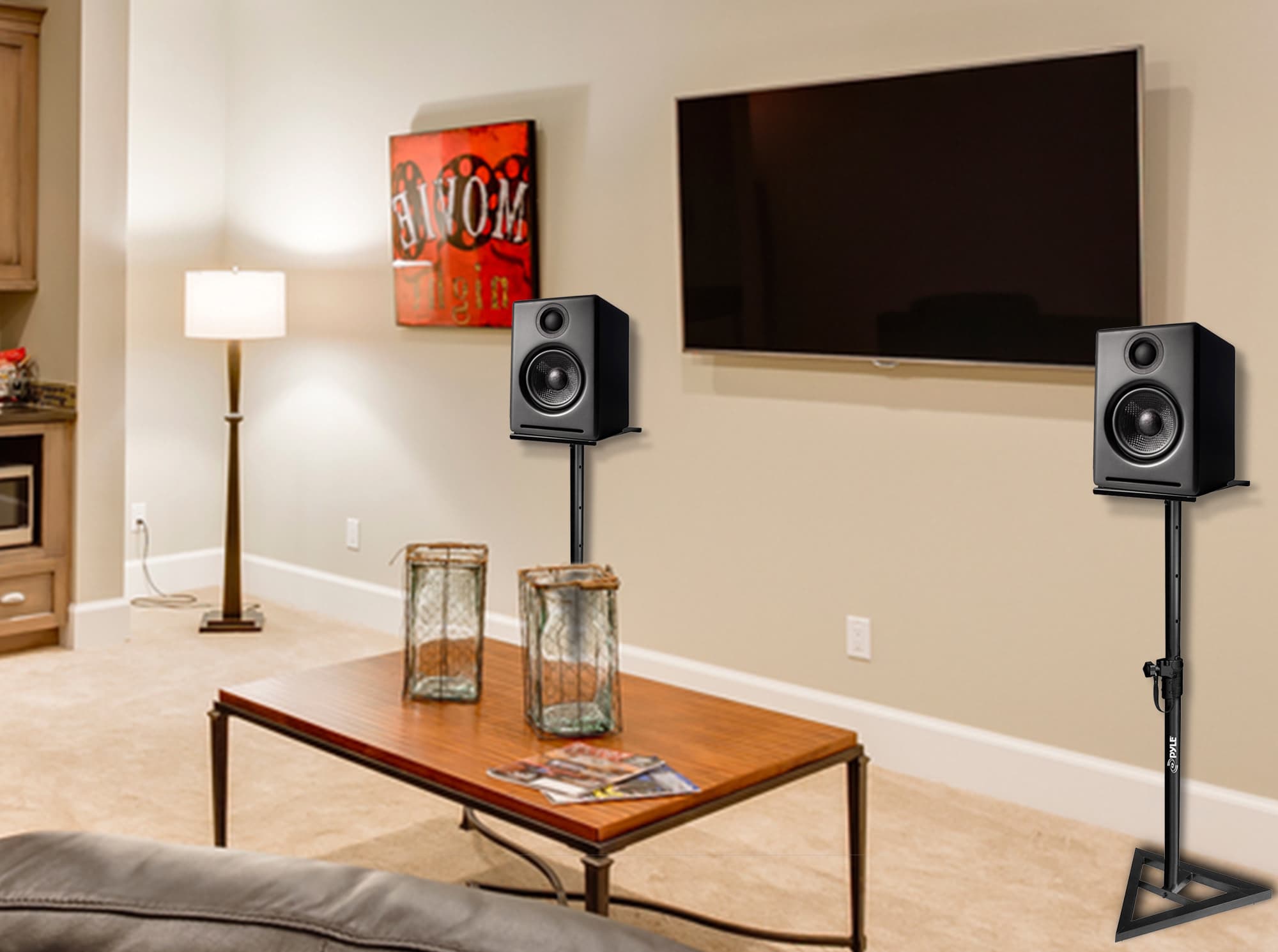 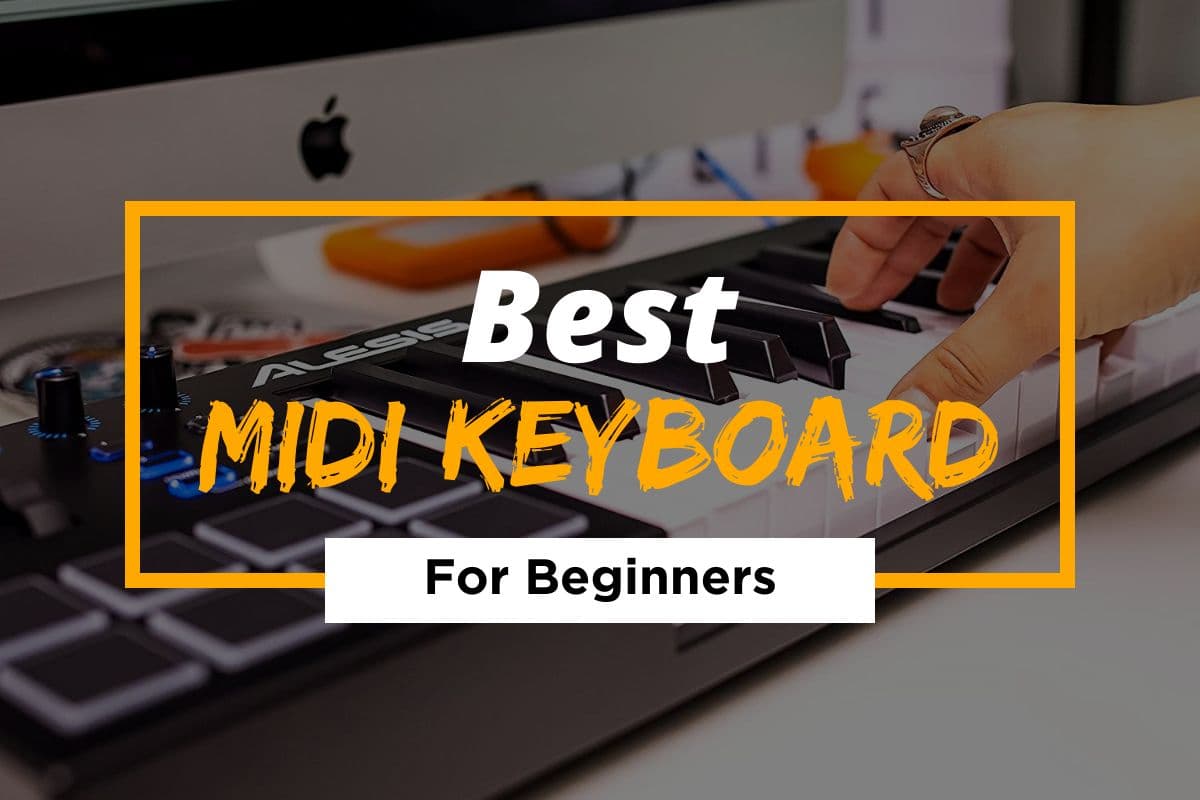 Best MIDI Keyboard For Beginners in 2021